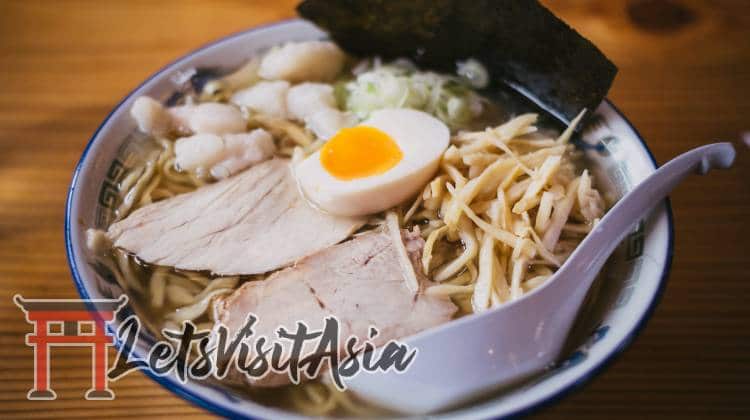 If we had to pick an all time favorite dish to eat in the world, then all the different types of ramen would be high on our list.

There are many different types of ramen and we recommend doing your research about them before visiting Japan. So you can make the most of your time in Japan trying them all.

As a result, we’ve written this article that’ll take you through the 4 main types of ramen. As well as our personal favorite regional types of ramen too.

But first, let’s start with taking you through the origins of ramen (if you’re not interested, skip straight through to the section afterwards).

Ramen is a Japanese noodle dish that consists of wheat noodles served in a meat or fish-based broth. Often flavored with soy sauce or miso, and uses toppings such as sliced pork, dried seaweed, kamaboko, green onions, boiled eggs and pickled ginger.

It is the most common type of noodle soup dish in Japan. The word “ramen” is the Japanese pronunciation of “lo mein”, from Chinese: 拉面; literally meaning “pulled noodles”.

Not only is ramen a traditional Japanese dish, it’s also become very popular in the United States and around the world.

There are many types of ramen noodles that people can choose from with different flavors and textures. Some noodles have a spicy flavor while others have a more rich flavor that includes soy sauce or miso.

We’ll take you through the different types and flavors of ramen in the next section below.

Ramen is one of Japan’s most beloved dishes and is now widely popular all over the world. It has been consumed for over 100 years.

There are countless variations, but at its core, there are 4 main types:

The noodles are usually curly and white. The soup is made with a soy sauce base with various vegetables added, such as carrots, onions, cabbage or leeks.

Toppings can be anything from pork chashu (thin strips of boiled pork) to shrimp tempura (battered and deep fried shrimp).

Shio means “salt” in Japanese. As a result, shio ramen is a light and salty soup (since it’s primarily been seasoned with salt).

It’s typically served with some kind of meat or vegetable.

In addition to salt, the broth of the shio ramen is typically made using; chicken and seafood, vegetables such as onions, garlic, carrots and celery, dashi and soy sauce.

Shio ramen can also be flavoured by adding ingredients such as sake and mirin.

Tonkotsu ramen is a type of ramen that originates from Fukuoka, Japan.

This type of ramen typically consists of wheat noodles in a pork-based broth. The soup has a milky white color, which derives from the addition of tonkotsu (pork bone) and salt to the soup broth.

Miso ramen is made with a meat or vegetable-based broth and noodles. But most importantly, it’s primarily seasoned with soybean (miso) paste.

The dish is typically served with toppings such as sliced pork, green onions and boiled eggs.

Other Regional Types of Ramen

As well as the 4 mentioned above, there are tons of other regional types of ramen (found in different regions in Japan).

Some of these flavours can be found almost anywhere in Japan, but the most popular regions have become known for their own unique regional variations.

We’ll take you through some of them in this section.

Kitakata Ramen is a regional style of ramen that comes from the northern part of Fukushima prefecture, Kitakata. It is one of the main types of ramen and has been around since the late 1800s.

Kitakata Ramen is known for its light and thin noodles, as well as its unique miso-based soup broth. The broth often has a slightly yellowish color to it, which comes from using soy sauce instead of salt to flavor it. The soup also contains shoyu (soy sauce), dashi (fish stock), and mirin (sweet cooking wine).

The toppings are often limited to onions, green onions, spinach, pickled bamboo shoots or seaweed. Kitakata Ramen is usually served with an egg on top.

Onomichi is a Japanese “city of ramen” that is known for their soy sauce-type soup, oily-textured noodles, and toppings like green onions, minced pork, egg or marinated seaweed. Onomichi Ramen can be found in many of Japan’s regions.

You also have the “shio shoyu style” Onomichi Ramen which has an udon-type noodle and shoyu (soy sauce) flavored soup.

As you may have already guessed, this type of ramen is the specialty ramen dish of Wakayama Prefecture.

Wakayama is a city in the central part of Wakayama Prefecture on Honshu Island in Japan. It was established on November 3, 1954. It has a population of about 300,000 people.

It is one of the few prefectures that still produce traditional ramen noodles and have many ramen restaurants that serve them.

In Wakayama, they refer to ramen as chuka-soba which literally means Chinese noodles. The Wakayama type of ramen usually has thin and straight noodle strands with a clear and soy sauce flavored soup (shako-mae style) or a combination of tonkotsu broth (with a pork bone base) that produces an opaque white soup.

Conclusion: Japan has many amazing different types of ramen

In conclusion, it’s clear that a bowl of ramen is a cultural icon and has the power to bring people from all walks of life together.

It’s one of our favorite dishes that has many different varieties to try. So you’ll never get bored of eating the same bowl over and over again.

If we had to pick a general favorite, we’d probably choose Tonkotsu; the rich, creamy broth is super tasty and never gets old.

However, we do love to continue eating all the different types of ramen whenever we visit new prefectures in Japan.